The key dates for the 2017/18 school year are attached below. They are also found on the HOME page of the school website. KEY DATES 2017/18

Donegal Hospice have asked us to design a remembrance tree. This is to hang memories of past loved ones from the branches during their annual remembrance service. 6LCA built this in conjunction with John O'Brien as part of their key assignment to build a public piece of artwork. They worked in a very tight deadline. Well done!

Thanks to Ms. McGrory and Ms. Cavanagh and the school choir and musicians for their rendition of 'Yellow' by Coldplay at senior assembly this morning. 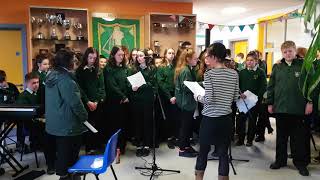 TY Workshop on Gender Equality TY Development Education students have started the year by learning all about the Sustainable Development Goals in class. These 17 Goals commonly known as the ‘Global Goals’ are a major talking point worldwide.193 countries have signed up to achieve these goals by 2030. We were fortunate to have Danielle Bonner deliver an interactive workshop to all TY students in our school on Monday 18th September on Goal 5- Gender Equality funded by the Ladde

A huge congratulations to the students who received their Junior Cert results on Wednesday. And we hope you enjoyed the celebration in the afternoon in Caiseal Mara.

Some of our new first years enjoying the sunshine on their first day in Moville Community College. More photos to follow in the coming days.#

Niamh McDermott to appear on RTE's Today with Maura and Daithi

GREASE is the word!

50 miles in March - Children in Crossfire